Thank you to Dolores Barber, Assistant Archivist, American College of Surgeons for the following submission:

A selection of historic films is now available for viewing on the American College of Surgeons (ACS) Archives web pages, including the following: 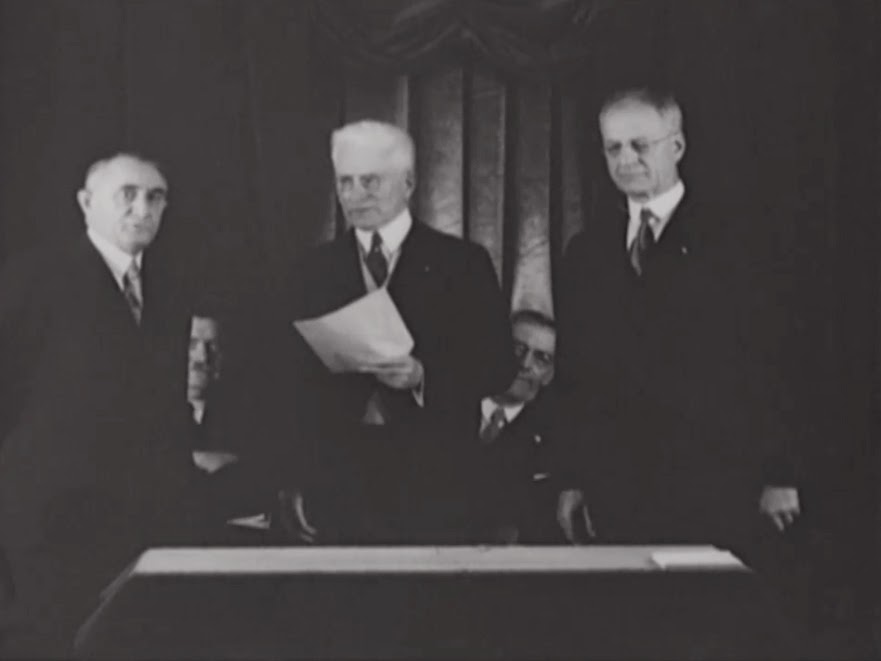 • The College’s first “talkie,” 1929. ACS Founder and Director General Franklin H. Martin, MD, FACS, introduces the officers, Board of Regents, and past presidents. This film was recently transferred from the original 35mm nitrate negative to preservation quality film stock. The Nitrate Film Vault at the Library of Congress holds the original negative.
[Image Caption: American College of Surgeons Officers, Board of Regents and Past Presidents in Session at the Clinical Congress, Chicago, 1929. Courtesy American College of Surgeons Archives.]

• Surgical operation films from the Gamble Collection. Hugh Agnew Gamble, MD, FACS, recorded many of his surgical operations in the 1940s on 16mm silent color film. Dr. Gamble's grandson, Hugh A. Gamble II, MD, FACS, donated the collection to the College. The film features Refrigeration Anesthesia in the Treatment of Arteriosclerotic and Diabetic Gangrene in the Poor-Risk Patient; and Gangrene Bowel Resection.

• To Serve All, 1963 and 1970. Past presidents and others explain the College’s history and accomplishments.

You can view these films on the ACS website. [http://www.facs.org/archives/films.html]

Approximately 100 of the films and videos in the Archives have been transferred to a digital format. The Archives also is planning a new online system that will provide visitors with access to full descriptions of all cataloged materials, including links to more films, videos, sound recordings, images, and texts. Many Archives resources are already available online.[http://www.facs.org/archives/onlineresources.html]
Posted by Chicago Area Medical Archivists at 12:13 PM

Email ThisBlogThis!Share to TwitterShare to FacebookShare to Pinterest
Labels: News

The Chicago Area Medical Archivists are pleased to announce this year's program for CAMA's Annual Medical History Symposium. This year's symposium will be hosted by the American College of Surgeons, Thursday, October 31. Be sure to note the 9:30 a.m. start time for presentations for this very full program. The day ends with a Halloween-friendly finish.

Posted by Chicago Area Medical Archivists at 12:40 PM No comments:

On Valentine’s Day, 1895, the Chicago Lying-in Hospital Dispensary was opened by Joseph B. DeLee, MD, the beginning of what would become an important chapter in the history of medicine in Chicago. I’ve put together a few documents detailing the humble beginnings of the Maxwell Street Dispensary of the Chicago Maternity Center.

Portrait of Joseph B. DeLee, MD: 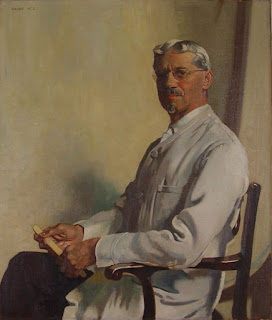 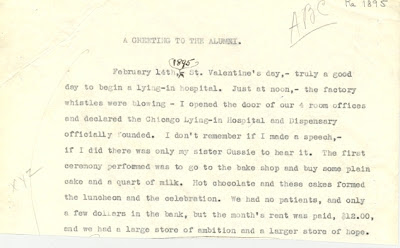 Posted by Chicago Area Medical Archivists at 5:22 PM No comments: